A World of Diets

Analysing diet trends from around the world 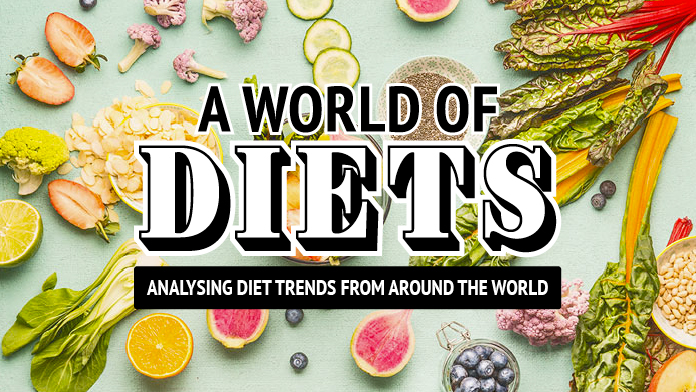 Whether it’s for health, lifestyle or weight-loss reasons, there are now more types of diet than ever before to choose from, from tried and trusted diet plans to ‘fad’ approaches which can actually be quite dangerous.

But which are the most popular diets in the world? Which have seen the biggest growth in popularity in the last five years and which have we all moved on from? Supplement Place analysed Google search data to find out!

So, of all the many diets out there, which is the one that the world prefers the most? The diet with the highest number of global searches was actually the Keto (Ketogenic) diet, which involves high-fat and next to no carbohydrates, in order to force the body to burn fats rather than carbs.

Keto was initially developed to help control epilepsy in children, but has increasingly been used to affect weight-loss and is considered a modern ‘fad’ diet.

Popular weight-loss programmes such as Weight Watchers and Slimming World also proved popular globally, as did intermittent fasting, which involves alternating between eating and fasting at certain times. 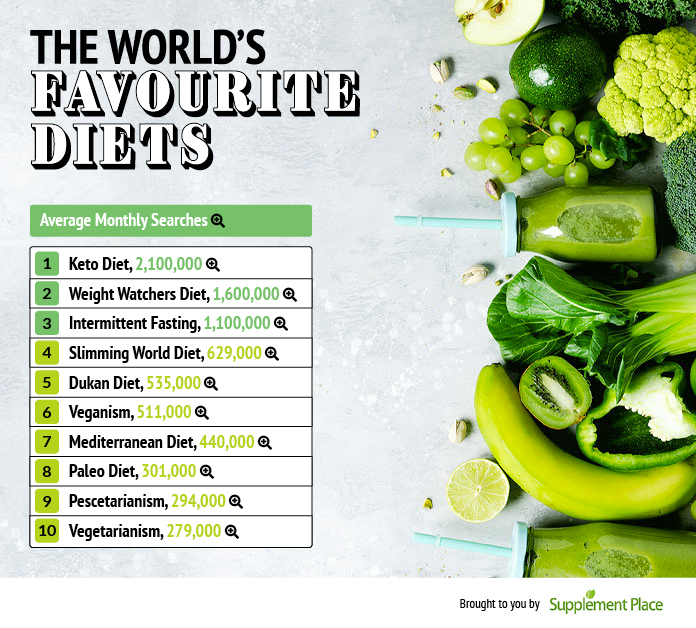 We also looked at which diets have seen the biggest increase in searches in the last five years and which have declined in popularity the most. 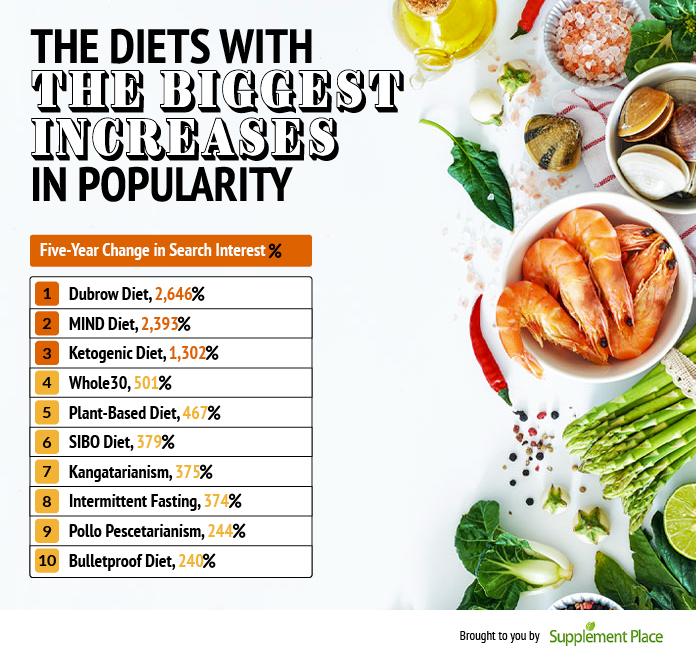 Right at the top of the list, it was little surprise to see the Dubrow and MIND diets, as these diets were only introduced in the last five years.

Behind these, we see that the keto diet has seen an increase of over 1,300% in the last five years, which outlines just how quickly it has risen to become the world’s favourite diet.

Searches for other medical diets have also increased, such as for the SIBO diet (379%) as well as vegetarian-influenced diets such as plant-based (467%) and pollo pescetarianism (244%) as well as some stranger ones such as kangatarianism (375%) which saw a spike after being mentioned on an episode of Love Island Australia.

The Diets Falling In Popularity 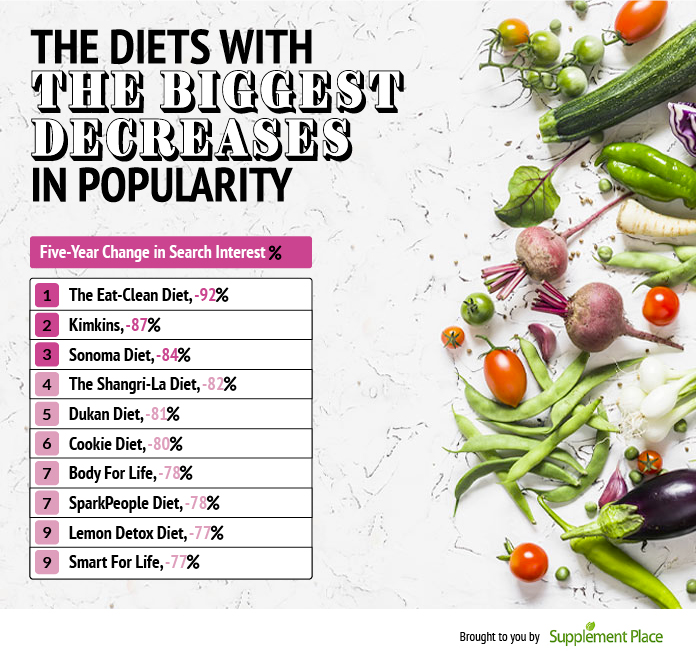 As for the diets which we’ve fallen out of love with, these were almost exclusively diets which have been criticised as fads, with many actually proven to do more harm than good, so it’s perhaps a good thing that our interest seems to have switched away from these and more towards healthier plant and medical-based diets.

Examples of diets which have seen a big drop in popularity include the cookie diet, which uses a specially formulated meal replacement cookie (consisting of just 800 calories a day), the Kimkins diet, which was found to be a scam, and the Dukan Diet, which is actually still very popular, with 535,000 monthly searches, but has seen an 81% decrease in the last five years. 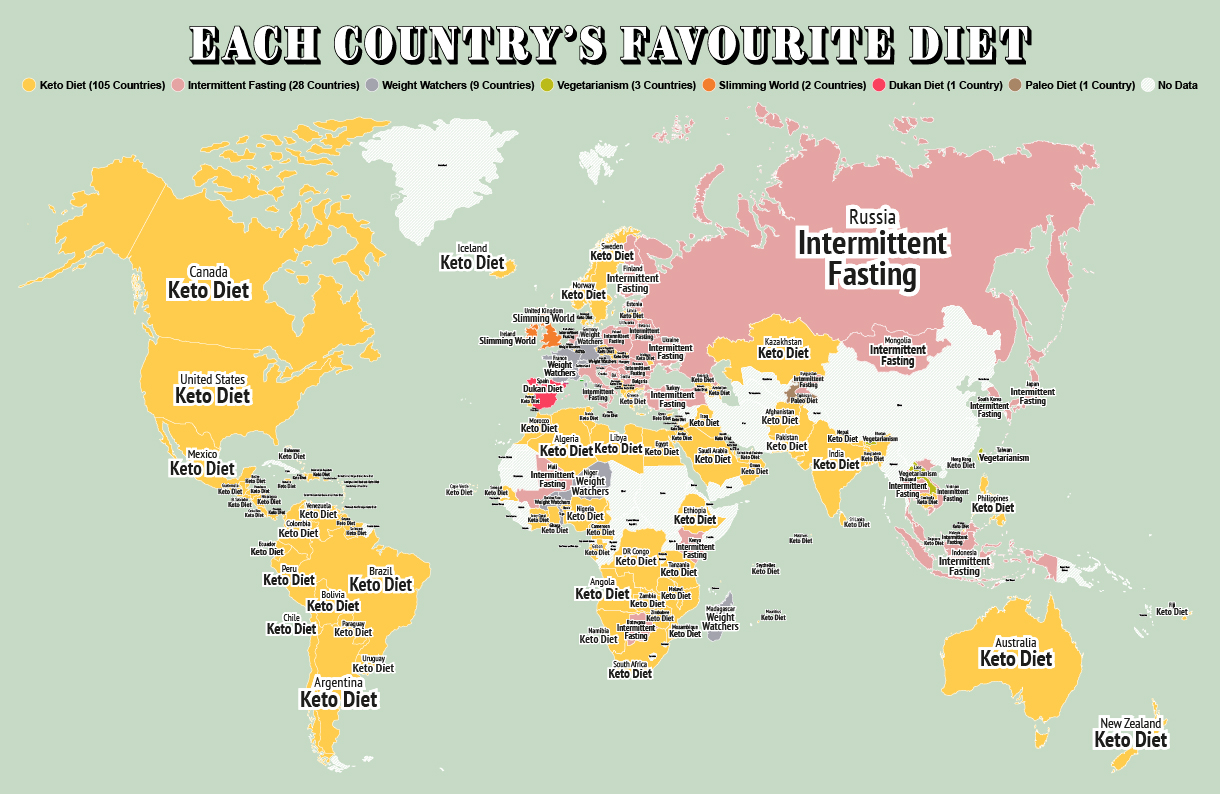 Finally, we also looked at search volume from each country around the world to reveal each one’s preferred diet.

The results showed that the keto diet was certainly the world’s favourite, being the preferred diet in 105 of the 149 nations for which data was available.

Intermittent fasting proved to be the diet of choice in 28 countries, including many in central and eastern Europe, while programmes such as Slimming World were preferred in the UK & Ireland and Weight Watchers in much of western Europe.

We spoke with Jessica Shand, Naturopathic Nutrition Coach, on dieting and the dangers of following a fad diet.

The best advice for people wanting to lose weight is not to start restrictive diets or get sucked into the fads we’re bombarded with online and are sometimes impossible to avoid!

Instead my advice would be to set clear and realistic intentions on what it is you want to achieve long term and that you will be able to enjoy (nobody wants something they dread doing, it's no way to live!). And remember, it's how you choose to fuel your body that counts, how you decide to nourish your body with the foods it needs to thrive and make your wellbeing your top priority - they go hand in hand.

Seek help and advice from qualified experts in nutrition and wellness and don’t go to social media influencers for advice when it comes to your health. Good, well balanced and wholesome nutrition, proper sleep and regular exercise work together to deliver long-lasting results. That will not only help you reach your goals but most importantly will help you feel your best and help you to thrive!

Fad diets that promise quick fix weight loss are not the answer, they never were!

All search volume data was sourced from Ahrefs Keyword Explorer and relates to the number of average monthly searches for each term.

Search interest change data was sourced from Google Trends, which gives a relative search interest score for each month over a given time period.