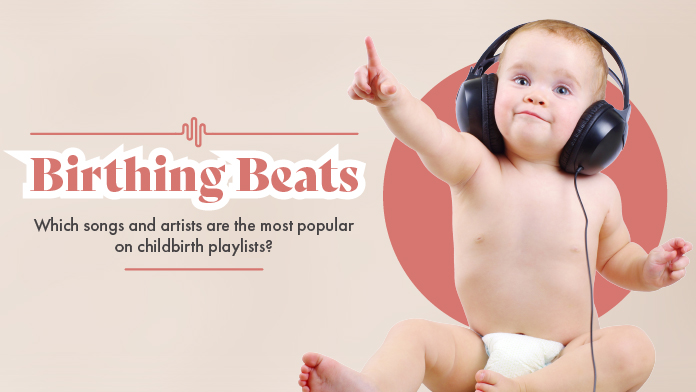 Which songs and artists are the most popular on childbirth playlists?

Analysing over 60 ‘childbirth’ playlists on Spotify and over 16,000 tracks, we can today reveal the songs and artists which are most commonly listened to when giving birth!

The songs which are getting us through childbirth 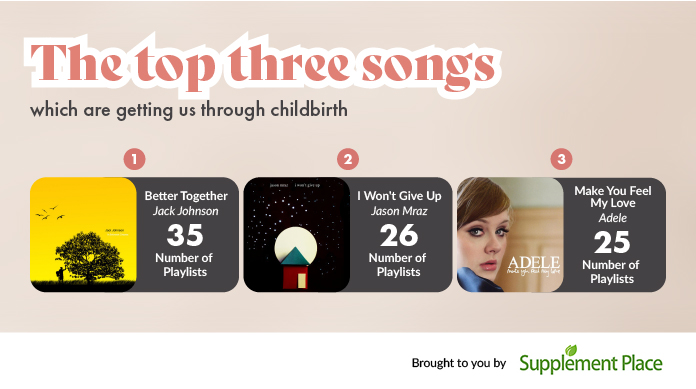 Taking the top place for the most popular song is the 2005 hit Better Together by Jack Johnson, the song has had a massive 460,197,498 plays on Spotify and appeared on over half of the playlists that we looked at!

I Won’t Give You Up - Jason Mraz

Make You Feel My Love- Adele

Make You Feel by Adele takes the third spot with 613,094,614 plays on Spotify and appearing on 25 of the playlists. 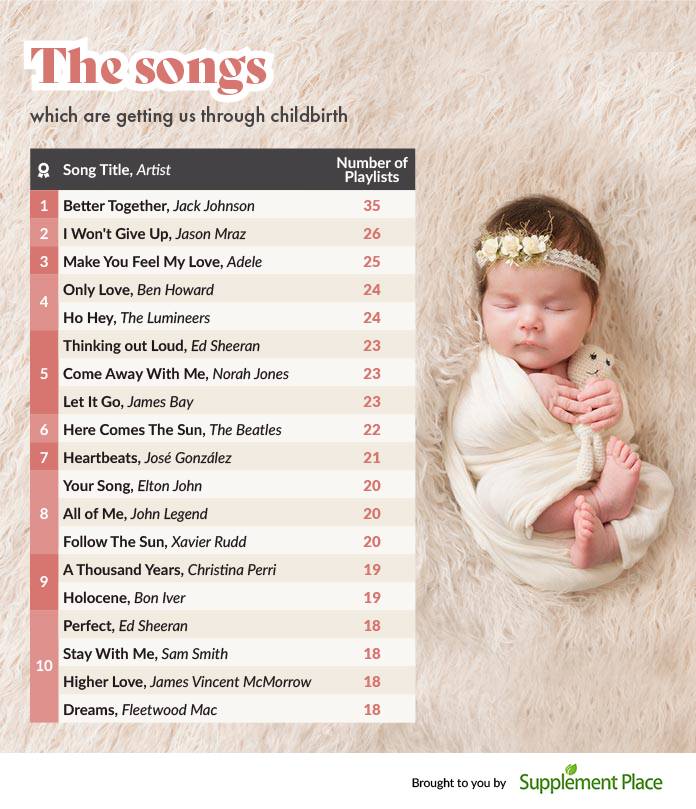 The artists which are getting us through childbirth 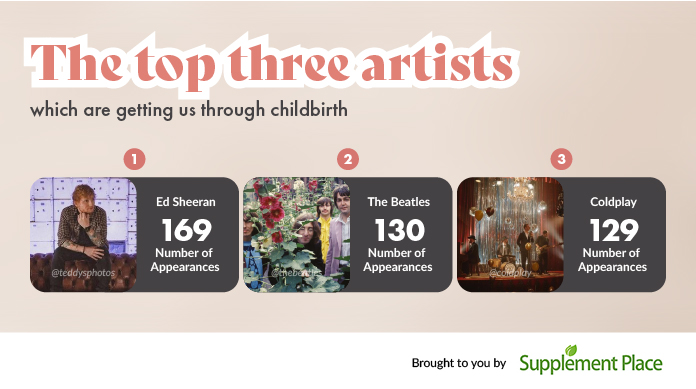 Taking the top spot is pop sensation Ed Sheeran, with 12 UK number ones, his genre of music is a combination of pop, folk and hip-hop. Also taking the number one spot for the most followers on Spotify with 76.3M followers. Sheeran has also sold more than 150 million records worldwide.

His song Thinking Out Loud also takes 5th place and Perfect comes in at number 10 on the Top 10 songs for childbirth!

One of the world's most famous bands, The Beatles, takes second place on the artist list. The rock-pop group from Liverpool, England are regarded as the most influential bands of all time due to their influence on popular music culture during the 1960’s and 70’s. They also have the most Number 1 hits of any band ever with 20 number ones.

With 18.6M followers and 23.6M monthly listeners on Spotify, still to this day the band are hugely popular, which is a real testament to their music.

Taking third place is Coldplay, the British rock band, who shot to international fame in 2000 with their record Yellow have released many other influential hits such as the number 1 Vida la Vida, The Scientist and Clocks with 28.9 million followers and 36.5 million monthly listeners on Spotify, it is not wonder that this band’s beautiful music has made it into the top 10 artists to give birth to. 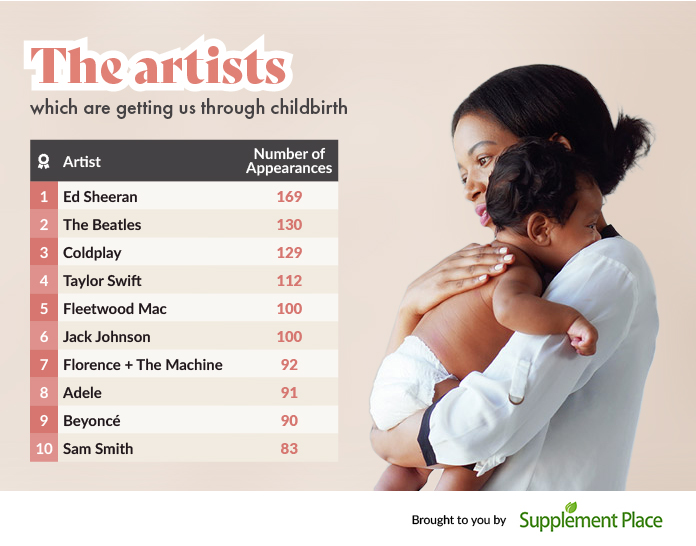 The most common BPM

As well as looking at which songs and artists appeared most often in these playlists, we also took a look at the average beats per minute across all these songs.

Across the original 16,000 songs, the average BPM was 118, which is around the same speed as Alicia Keys, If I Ain’t Got You, Mae Robinson What a Wonderful World and Patrcia by Florence and The Machine.

When we look at just the top 10, the average BPM is slightly lower at 110 BPM which is the BPM on the track Better Together by Jack Johnson, so this may well be the key to the success of this song on topping the child birthing playlists! 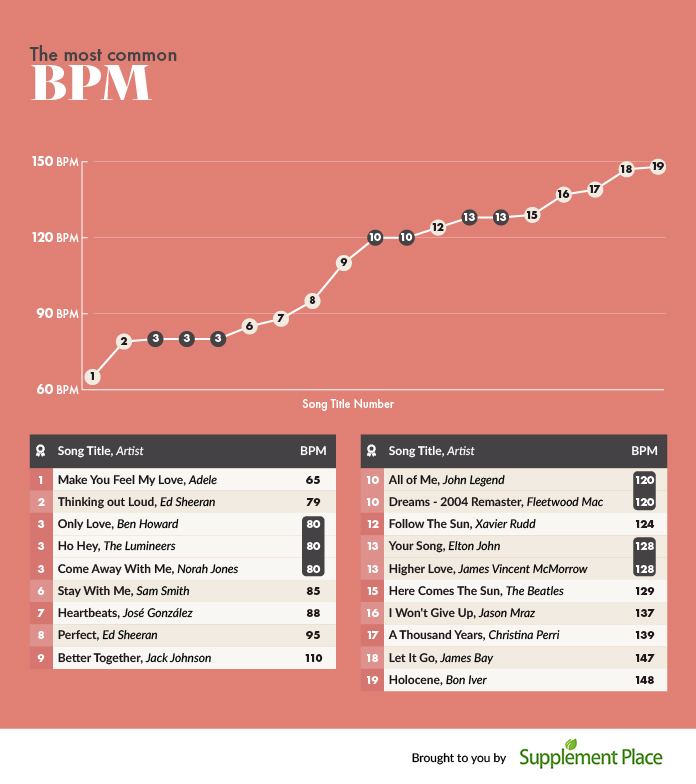 Want to make your own birthing playlist? Start with the top songs, featured below…

I Won’t Give Up - Jason Mraz

Make You Feel My Love - Adele

We collated a list of over 16,000 songs by using playlists created by users and by Spotify that had a reference to childbirth in their titles. We searched for playlists using the words 'childbirth’, ‘birthing’, ‘birth’ ‘labour’, ‘birthing at home’, ‘hypnobirthing’ to give us a variety of playlists.

By taking the songs from each of these playlists, we were able to find which songs and artists featured in the largest number of playlists, allowing us to discover which song is the most popular to listen to when giving both and which artists are most listened to.