The UK cities that know how to chill 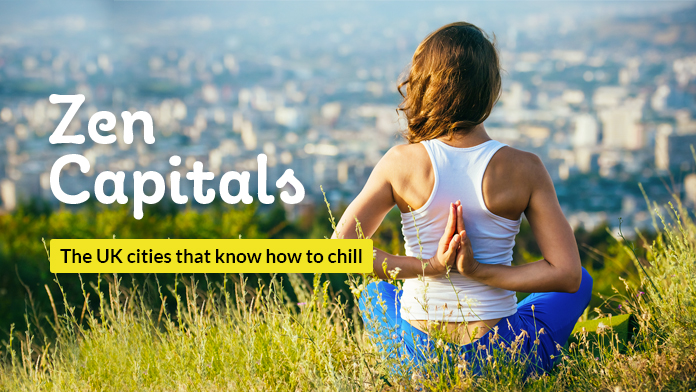 Stress and anxiety are often unavoidable parts of daily life. Whether you’re worrying about work, family events, relationships, or even big global issues, being able to effectively deal with your stress is vital for your personal wellbeing.

We know that everyone has different coping mechanisms to handle stress. You might find that exercise helps you shake the negative energy, or getting engrossed in a good book allows your mind to focus on something you enjoy. Some people may find that aromatherapy helps to soothe their nerves, while others might focus on what they put into their body, consuming a balanced diet with appropriate vitamin supplements.

However, have you ever wondered if people are as stressed as you elsewhere in the country? Are there specific places where people enjoy a calmer and more positive life, free from stress and anxiety?

We believe that in 2021 we could all do with getting a little more ‘zen’, so we’ve looked at a range of different factors to bring you the most chilled-out cities in the UK.

The ten most ‘zen’ cities in the UK

Here you can see the top ten cities in the UK for a calm and chilled-out life: 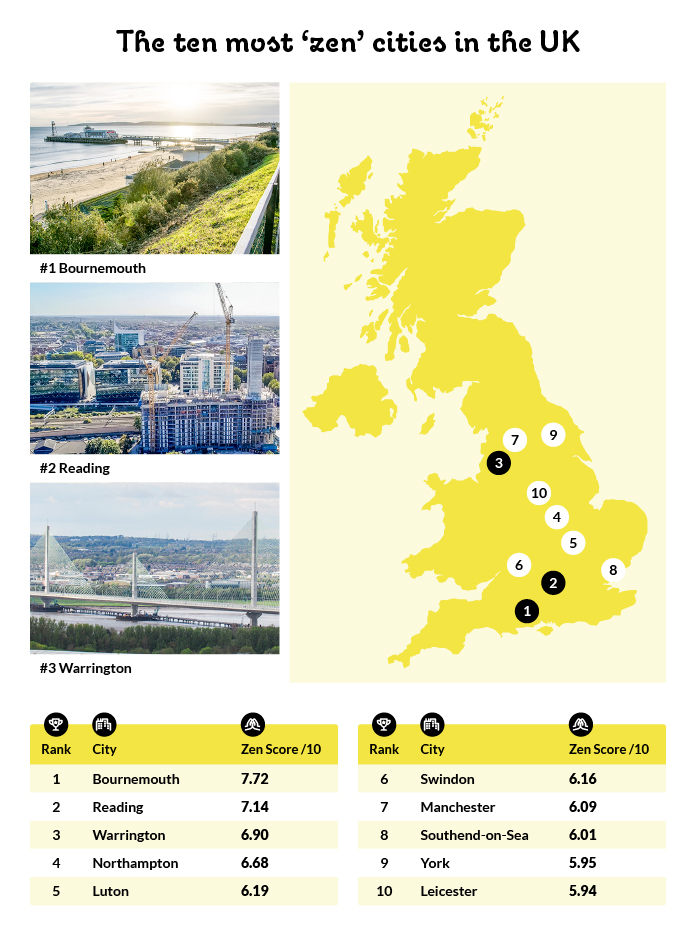 In first place, claiming the title of the UK’s Zen Capital is Bournemouth, with a score of 7.72 in our zen city index. With so many fantastic beaches within reach, it’s no wonder that the residents of Bournemouth are the most chilled-out in the country. The town is also home to several public gardens, a delightful seafront, and the unmissable Bournemouth Pier.

Bournemouth did so well thanks to its high score for life satisfaction and coming top in the country for happiness, while at the same time scoring in the bottom 5 for anxiety levels. It must be all that sea air that keeps the locals so calm!

Not far behind in second place is Reading, with a score of 7.14. This large Berkshire town is most widely known for the Reading Festival, one of the biggest festivals in the country. When the locals aren’t frequenting the mosh pit, they’re actually some of the most laid-back people you’ll come across.

Reading actually scored the highest in the country for life satisfaction and is also the place with the most searches for ‘yoga’ compared to its population!

Our final podium place goes to Warrington, claiming third place with a score of 6.9. Located in the North West of England, nestled between the major urban centres of Manchester and Liverpool, Warrington is an unassuming entrant to our list.

Scoring well across the board, Warrington has earned its place as one of the most chilled places in the country.

Happy Places: Where in the UK is the happiest?

The happiest city in our index is the overall winner, Bournemouth! Enjoying the good life on the coast, the residents of Bournemouth have the happiest lives, scoring 7.72 out of 10. That’s an increase of 3.9% over the last 5 years.

However, the city with the biggest five-year rise in happiness is Plymouth, another south coast location, having increased its happiness levels by 4.69%.

Are you satisfied? The UK towns and cities with the highest life satisfaction

The town where people are most satisfied with their lives is Reading, with a score of 7.81. This beautiful Bedfordshire town benefits from easy access to London, without being just another commuter town. This relaxed spot in the home counties provides residents with the best of both worlds.

Ipswich is the place with the biggest increase in life satisfaction over the past five years, recording a rise of 7.03%. This Suffolk town is just a short journey away from the East Anglian coast and is surrounded by Areas of Outstanding Natural Beauty on two fronts, so it’s not hard to guess where this satisfaction stems from.

Worry not! These are the UK towns and cities with the least anxiety

The city with the lowest levels of anxiety is Northampton, with a very low anxiety score of 2.49. Located in the East Midlands, far from any major city, Northampton has a peaceful air about it that is not easily replicated.

The UK location with the biggest 5-year drop in anxiety is Luton, with a huge decrease of 12.04%! That’s almost 4% ahead of second-place Middlesbrough, whose 8.36% decrease is impressive in its own right.

What are we searching for? The places in the UK that search for the most ‘zen’ topics

The city that made the most Google searches for “green spaces” was Oxford, with 9.2 searches in the last year per 10,000 residents, closely followed by Cambridge on 8.7 searches per 10,000, the people of Oxford appear to value their time in green spaces more than anyone else in the country.

Search term: parks near me

Manchester was the city with the most searches for “parks near me”, with 712 searches per 10,000 people. Could it be that living in a large city makes Mancunians appreciate their parks much more than those living in less urban environments?

The town with the highest number of searches for “yoga” is Reading, with 323.5 searches per 10,000 people. Having already taken second place in our overall ranking of the UK’s most “zen” cities, it appears that residents of Reading are the nation’s top yoga enthusiasts. How’s that for an accolade?

We wanted to find out which towns and cities are the most chilled-out places in the UK, crowning the winner as the country’s “Zen Capital”. To do this, we first built a list of the 50 UK towns and cities with the highest populations using official data sources.

Next, we used ONS data to find how well the locations on our list ranked for quality of life factors such as happiness, life satisfaction and anxiety. We also used these figures to calculate the rate of change since the figures from five years ago, which were available in the same data set.

We also found the number of annual Google searches for several keywords which relate to the ideas of peacefulness, calm, and “zen”, using Google Ads Keyword Planner. The keywords used were “green spaces”, “meditation”, “parks near me”, and “yoga”. Once we had the figures for each of these search terms, we divided the search volumes by the populations of each city to give a proportionate score.

Finally, we gave each town and city a normalised score out of ten for each factor, before taking an average score across all of the factors. This allowed us to produce an overall ranking and crown one location as the UK’s zen capital.