Where in the UK is it easiest to seek help for your mental wellbeing?

It’s estimated that as many as one in four people experience a mental health problem of some kind each year, and more and more people are seeking help for issues such as anxiety, depression and disorders such as OCD and PTSD, especially in light of the coronavirus pandemic, with the isolation and changes to our everyday lives that we’ve all had to endure.

We’re blessed to have lots of support available to us here in the UK, but which parts of the country is it easiest to access this help when it's needed?

We’ve taken a look at the number of registered psychologists in some of the country’s major towns and cities, as well as the overall ease of accessing mental health support based on things such as cost and wait times.

Talking to a professional is a valuable tool for those suffering from mental health issues, so first, we looked at the towns and cities with the highest number of chartered psychologists per 100,000 people.

Taking the top spot is Oxford, where there is seemingly an abundance of mental health support on hand for those who need it, with 50 chartered psychologists in the city, which has a population of just over 150,000 people, meaning there are just under 33 for every 100,000 people!

Often mentioned in the same breath as Oxford in terms of academic institutions and achievements, Oxbridge clearly excels in terms of providing mental health support too, as Cambridge came in second place, with 30 chartered psychologists, and just less than 24 per 100,000 people.

Not far behind Cambridge was Bath, Somerset, which is home to 21 chartered psychologists, but has a population of just 88,000 people, meaning it ranks third on our list.

The areas spending the most per person on mental health support

We’ve also taken a look at local government spending to see which councils are investing the most heavily into supporting those with mental health issues, as well as how this breaks down per person.

Note that this data was only available for England and some councils may have these services funded by another overarching council instead.

The largest city in the South West, Bristol also enjoys a high level of mental health support per person, with the local government spending more than any other, both in overall terms and when we break it down per person.

Another of the country’s major cities takes second place, this time Leicester, in the East Midlands, where the combined budget for mental health services stands at just under £20 million a year and £56.13 per person.

The Wirral Peninsula, just outside of Liverpool has the third-highest spend per person, at over £17 million in total and £52.87 per person.

How long do we have to wait for mental health support? 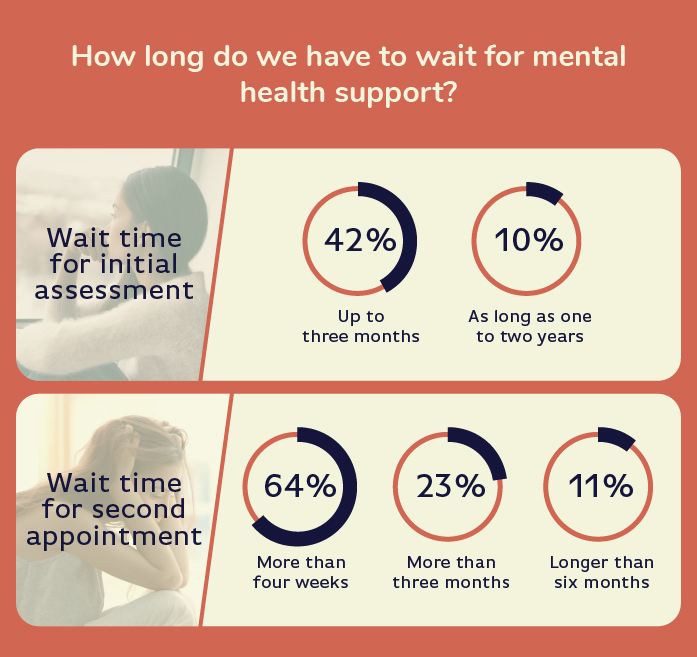 It’s all well and good having lots of support available for people suffering with their mental health, but waiting times to see somebody can be frustrating.

According to the Mental Health Foundation, 42% of people had to wait up to three months for an initial assessment, although 10% had to wait as long as one to two years.

Following this initial assessment, waiting times can be even worse, with another survey by the Royal College of Psychiatrists saying that 64% of people have to wait more than four weeks for a second appointment after an initial referral, with 23% waiting more than three months and 11% waiting longer than six months.

The same survey revealed that two-fifths of people waiting for mental health treatment end up having to contact emergency or crisis services before being seen, with 11% even ending up in A&E.

How much does mental health support cost? 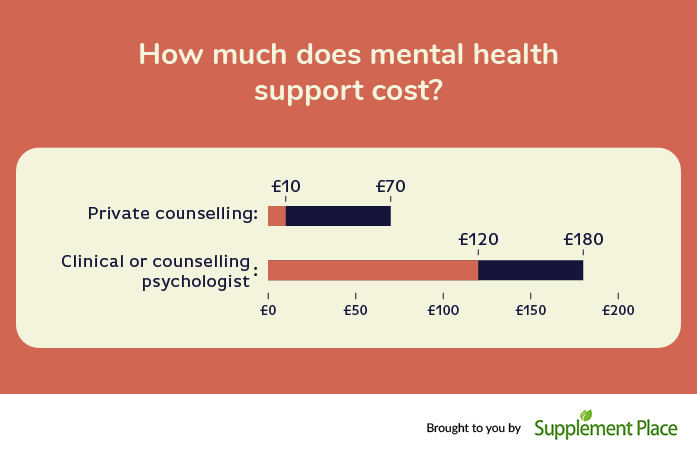 Ultimately, the cost of getting help for your mental health issues varies a lot depending on a number of factors such as the type of treatment that you’re seeking and where you live.

Data on waiting times sourced from surveys by the Mental Health Foundation and Royal College of Psychiatrists.

Data on average costs sourced from the NHS and My Online Therapy.