We all know how important it is to be mindful of what we eat, but how much do we really pay attention to what’s in our favourite foods?

What’s Inside the Most Popular Foods?

When you’re trying to be mindful of what you eat, it can be a bit confusing deciphering the labels of lots of different products. We’ve made it a little easier by looking at 100 different food items, comparing their nutritional values in each serving, including calories, fat, sugar, and salt.

These are the products which ranked highest and lowest in each category when looking at the nutritional value per serving.

What’s in the most popular loaves? 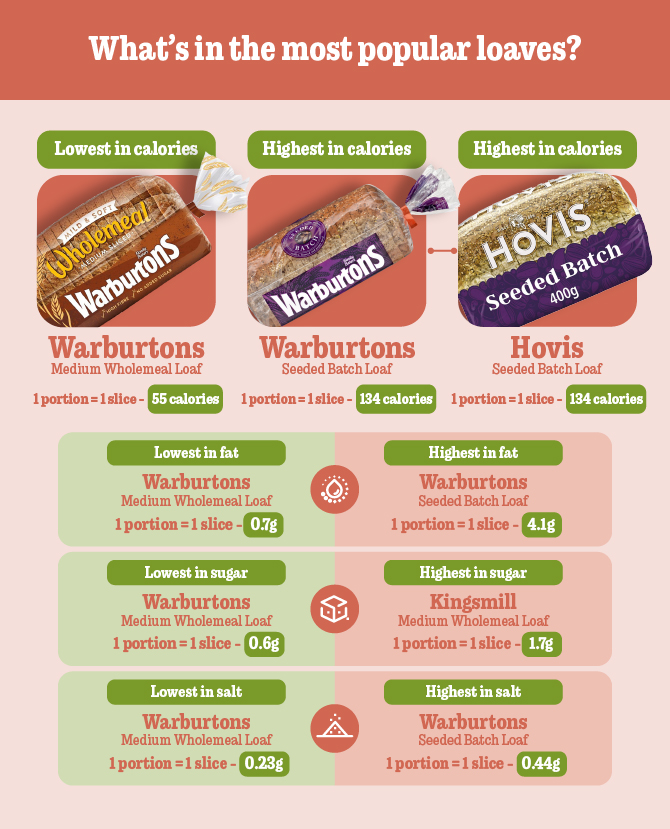 We often think of brown bread as being a healthy alternative to white bread, but when we look at the nutritional value of some of the most popular loaves, we see that while white bread doesn’t have the lowest amount of calories or grams of fat, it also doesn’t have the most either.

While it’s important to remember that not all fat is necessarily ‘unhealthy’, it’s worth keeping an eye on those seeded loaves if you’re watching your fat and sugar intake!

What’s in the most popular cakes? 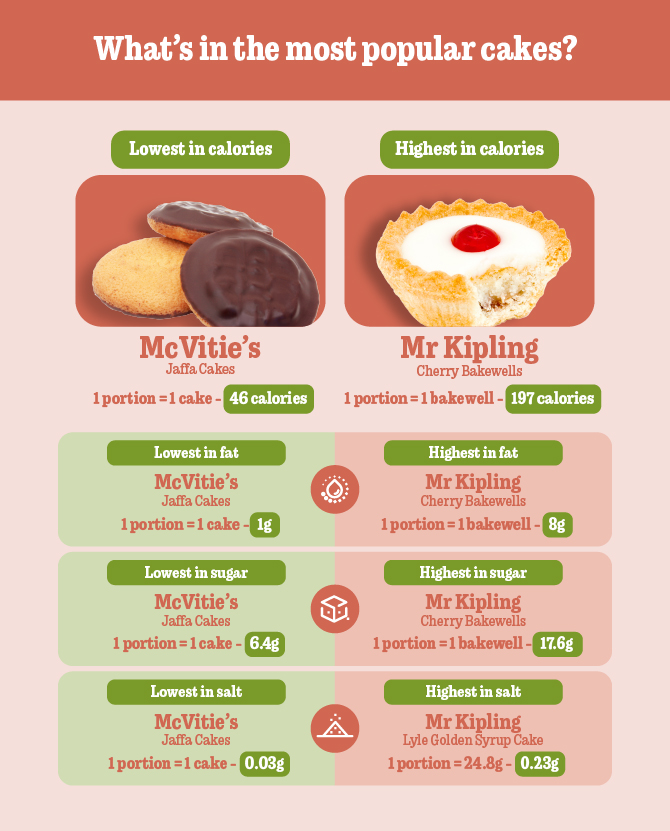 We might not exactly expect cakes to be particularly low in calories and sugar, but when looking at what’s in some of the most popular cakes, we can see that some are certainly better than others if you’re wanting to watch what you eat.

Indulging in one or two Jaffa Cakes will have a much smaller impact on your daily intake than if you wanted to treat yourself with a Cherry Bakewell or a slice of Lyle Golden Syrup Cake.

What’s in the most popular chocolates? 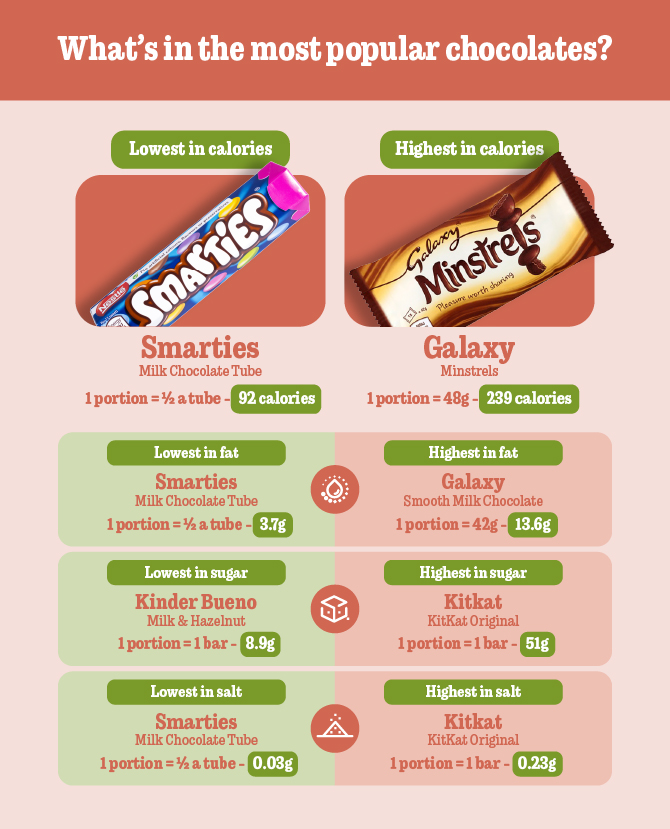 As one of life’s great joys, chocolate is something that should be enjoyed in moderation. When it comes to the nutritional value of some of our favourite chocolates, there are some vast differences, from the surprisingly high salt and sugar content in the humble KitKat, to the low calories in half a tube of Smarties - as long as you can stop at just half the tube!

What’s in the most popular sweets? 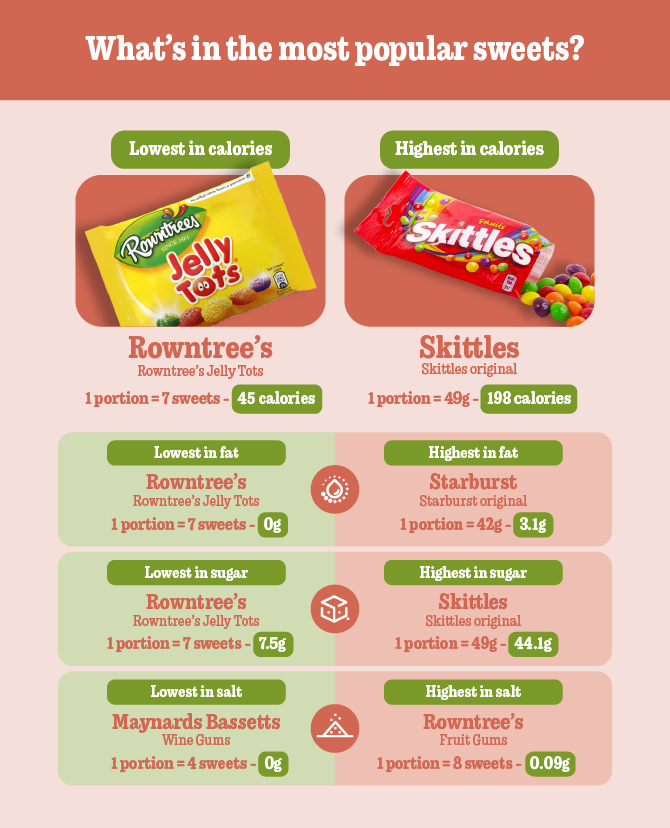 With plenty of sugar packed into these sweets, it’s definitely worth knowing exactly what is inside these packets. With Jelly Tots containing just 45 calories per portion of 7 sweets, they might be a good choice for a little sweet treat. Skittles, on the other hand, contain 198 calories in 49g - while this is a larger portion, we can see that the sugar content is much higher 44.1g in a portion of Skittles, compared to 7.5g in a portion of Jelly Tots.

What’s in the most popular cereal? 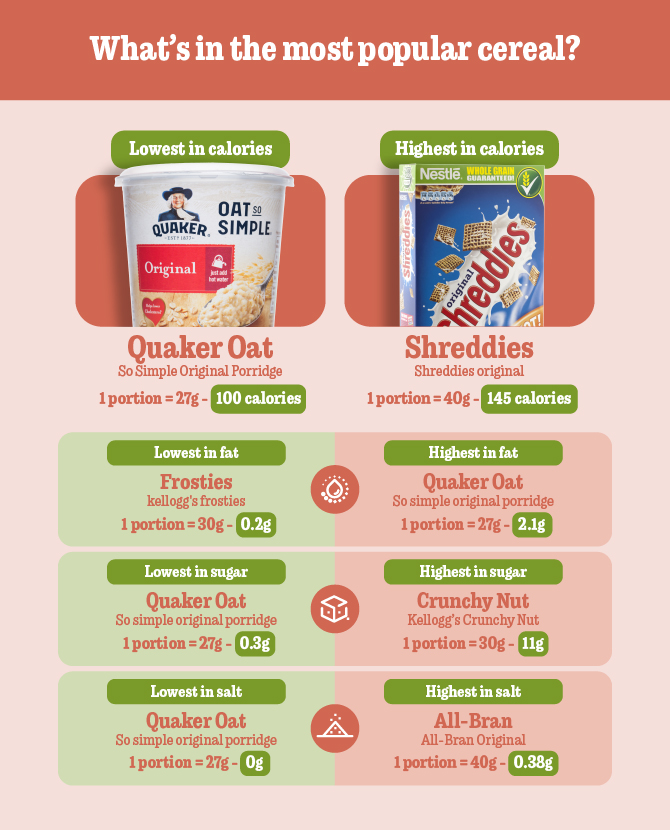 A bowl of cereal is a great way to start the day, but do you know what goes into your morning meal? While we looked at cereals like Coco Pops and Frosties which you may expect to be high in sugar or calories, it’s actually Shreddies which has the most calories per portion, with 145 total calories, compared to 100 for Oat So Simple.

What’s in the most popular condiments? 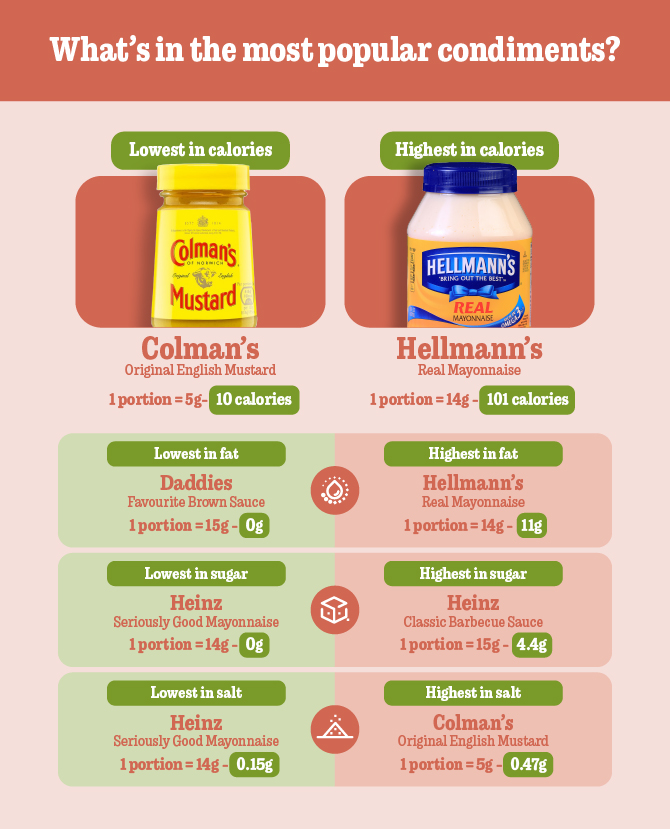 These condiments are food cupboard staples, but which meal accompaniments add the most calories to your meals? Packing in plenty of flavour, Colman’s English Mustard has just 10 calories per portion, but Hellmann’s Mayonnaise contains 10 times as many calories - 101 to be exact.

What’s in the most popular spreads? 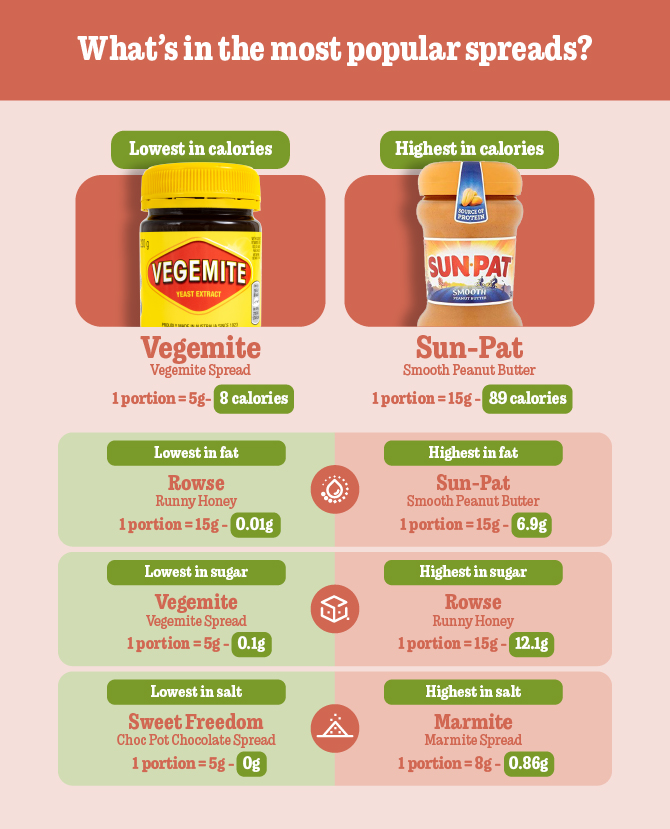 If cereal isn’t quite to your taste for breakfast, how about toast smeared with these popular spreads? Vegemite may be an acquired taste, but it is low in calories, with just 8 calories per portion, just a fraction of the more calorific Sun-Pat Peanut Butter.

What’s in the most popular biscuits? 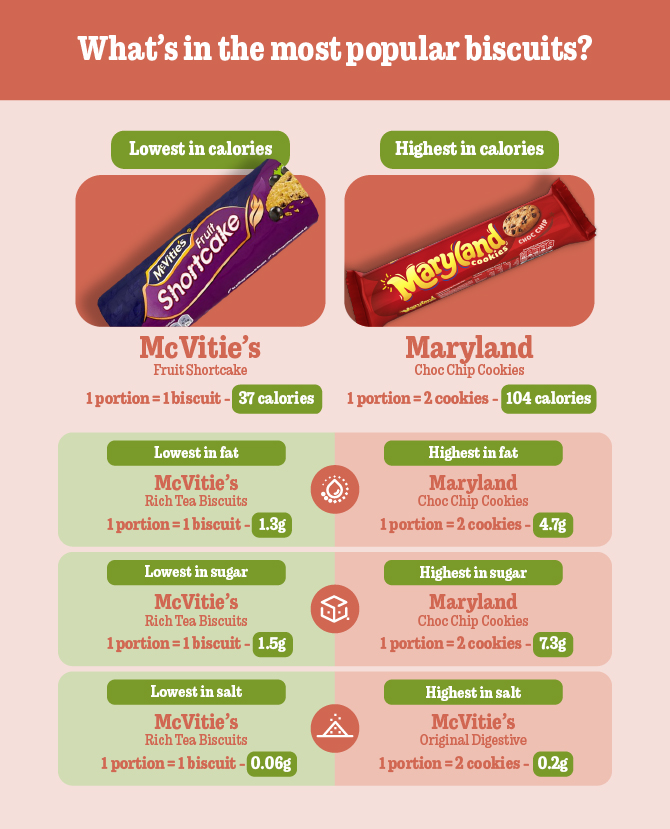 It’s probably not going to come as much of a surprise that cookies are at the top of the list when it comes to calories, with 1 portion of 2 Maryland Choc Chip Cookies containing 104 calories, so if you’re looking to satiate that biscuit craving but you want to keep you calorie intake down, McVitie’s Fruit Shortcake biscuits may serve you better with just 37 calories per biscuit.

What’s in the most popular crisps? 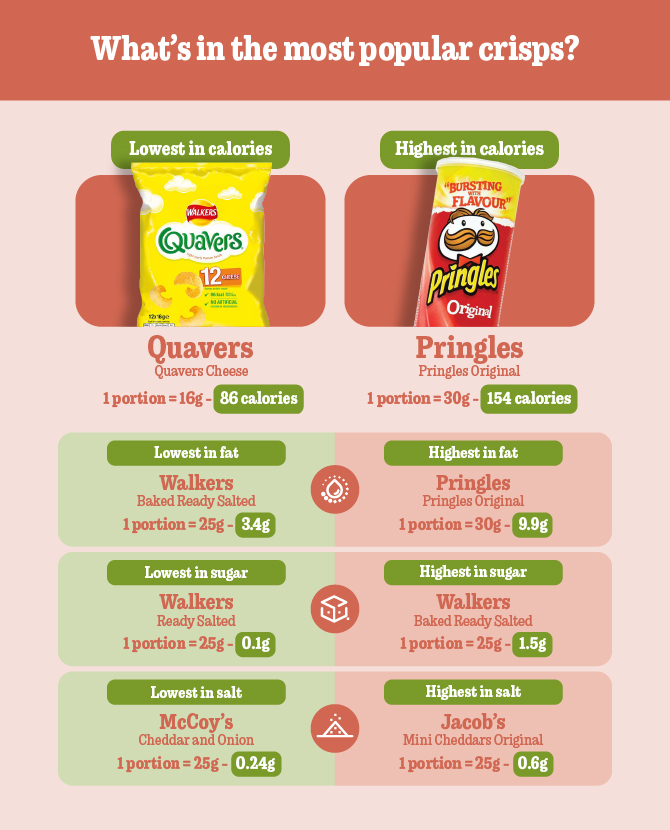 A bag of crisps makes a great snack, but do you really know what you’re eating? Quavers take the top spot for lowest calories, with 86 calories per serving, whereas Pringle Orignal stack up at the other end of the scale, with 154 calories per serving.

What’s in the most popular health foods? 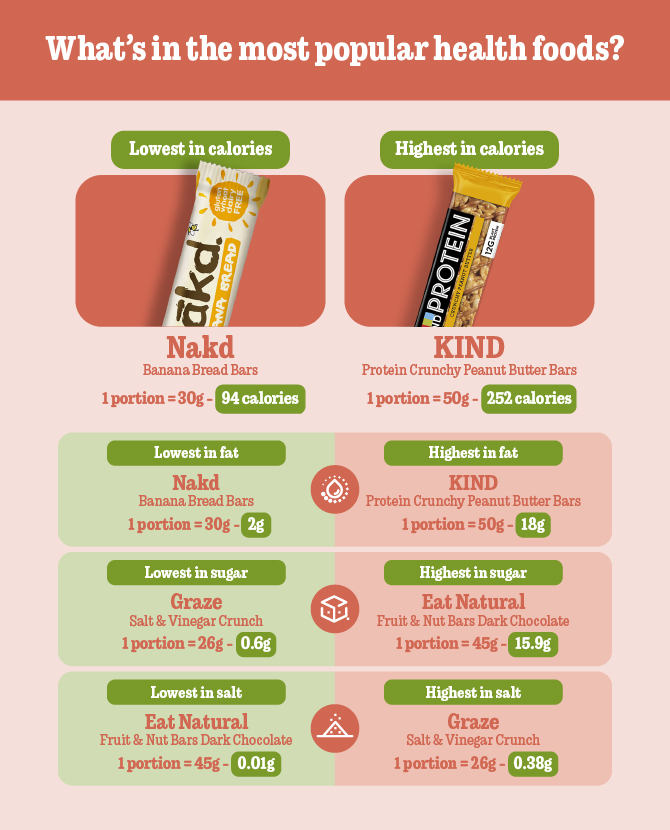 We expect health foods to be just that - healthy. However, the number of calories, as well as the fat and sugar content may surprise you. Again, it’s important to remember that some of the sugar in these products will come from natural sources, but while many of these products may be beneficial in some ways, they may not be the best choice if you’re counting calories. KIND’s Protein Crunchy Peanut Butter bars contain 252 calories, whereas Nakd’s Banana Bread bars have less than half that, with just 94 calories.

The Top 100 Most Popular Foods Ranked

Using a list of the most famous foods and brands from YouGov and The Grocer as well as searching supermarket sites, we were able to compile a list of 100 of the most popular foods across a range of categories and brands.

We then used a number of top supermarket sites as well as the brand sites themselves to find the nutritional information for each product on our list.