The STI hotspots where you’ll want to be extra careful 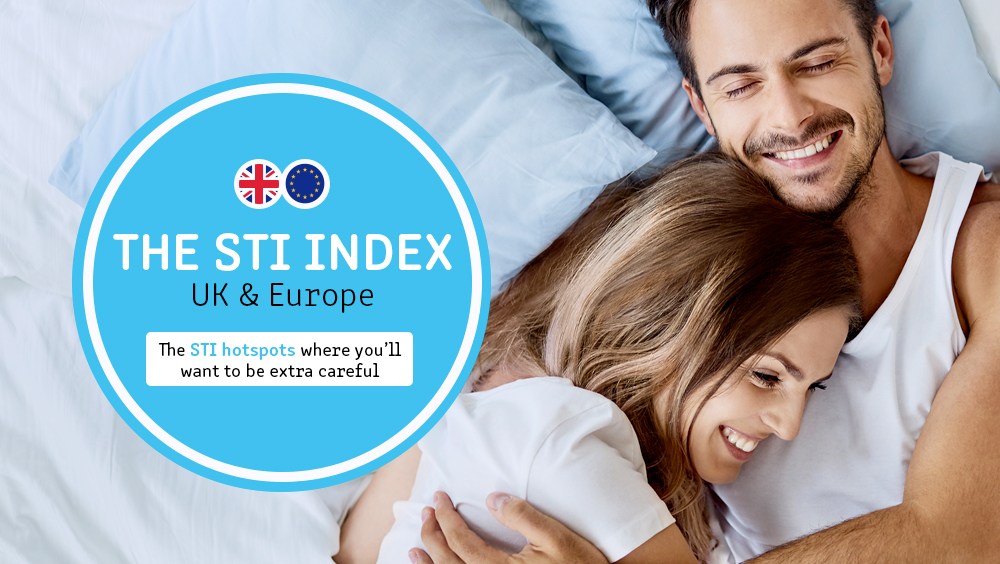 There are many ways in which we look after our health, from going to the gym and staying active, to adopting a healthy diet and taking all the right vitamins and supplements. Our health is extremely important as it impacts our ability to live life to the fullest.

Of course, there are some instances where we often slip up. Things like having a few too many drinks at the pub, staying up late to binge-watch that great new series, or indulging in your favourite unhealthy takeaway can all damage our health, but once in a while, it’s okay to treat yourself.

However, when it comes to sexual health, many people seem to disregard their health by not using proper protection. Whether this is due to being caught up in the moment, or simple absent-mindedness, this can lead to all manner of unpleasant infections which you will have to experience first-hand.

With this in mind, we wanted to find out where the biggest STI hotspots are in the country, and in Europe. This way, whether at home or away, you might be encouraged to protect your assets the next time things get steamy.

STIs in the UK

We’ve found out which UK locations have the highest diagnosis rate for a range of different sexually transmitted infections, as well as which have the most STIs overall. 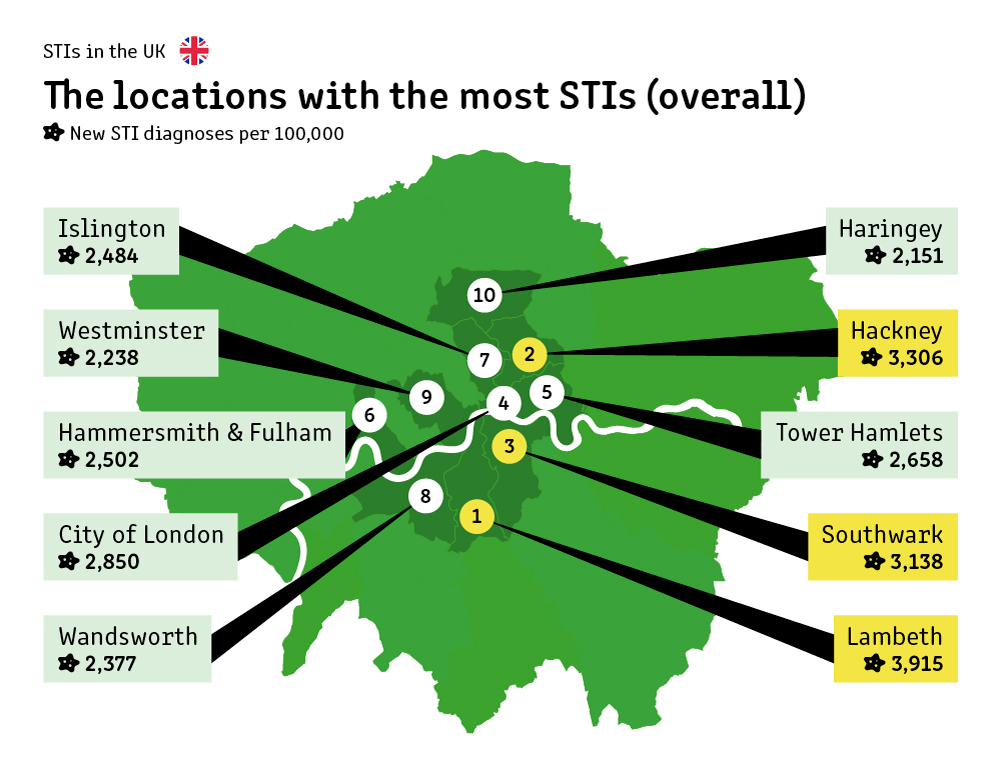 The locations with the most STIs (overall) 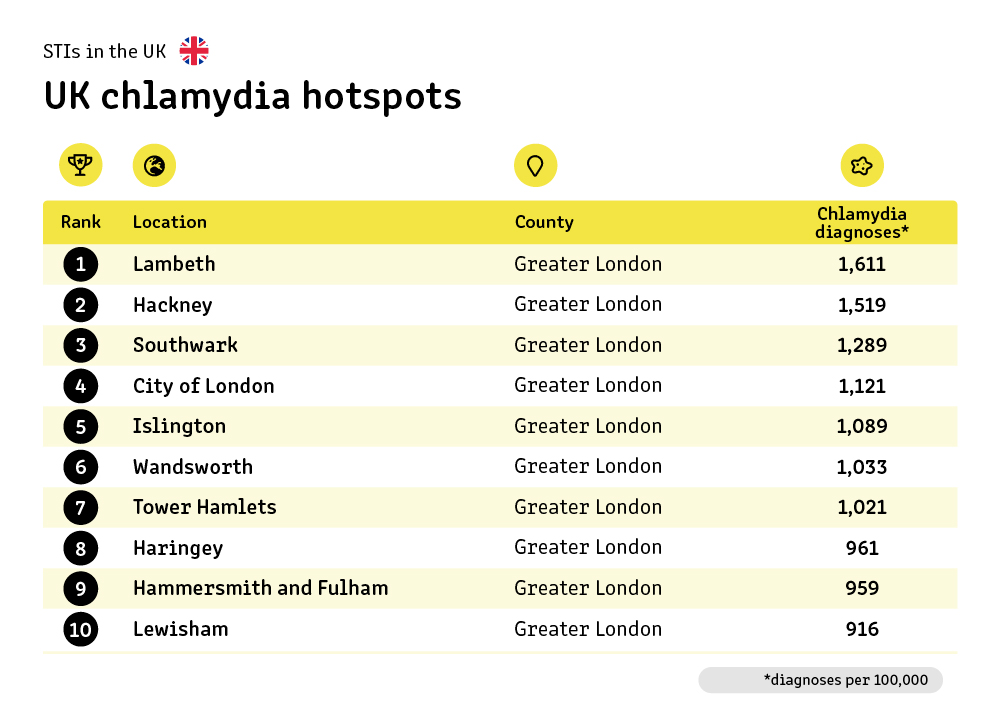 Not only are all of the top ten locations for chlamydia diagnoses in London, but the top three places are the same for overall STIs. If you’re feeling romantic in these areas, maybe think of protection at the same time. 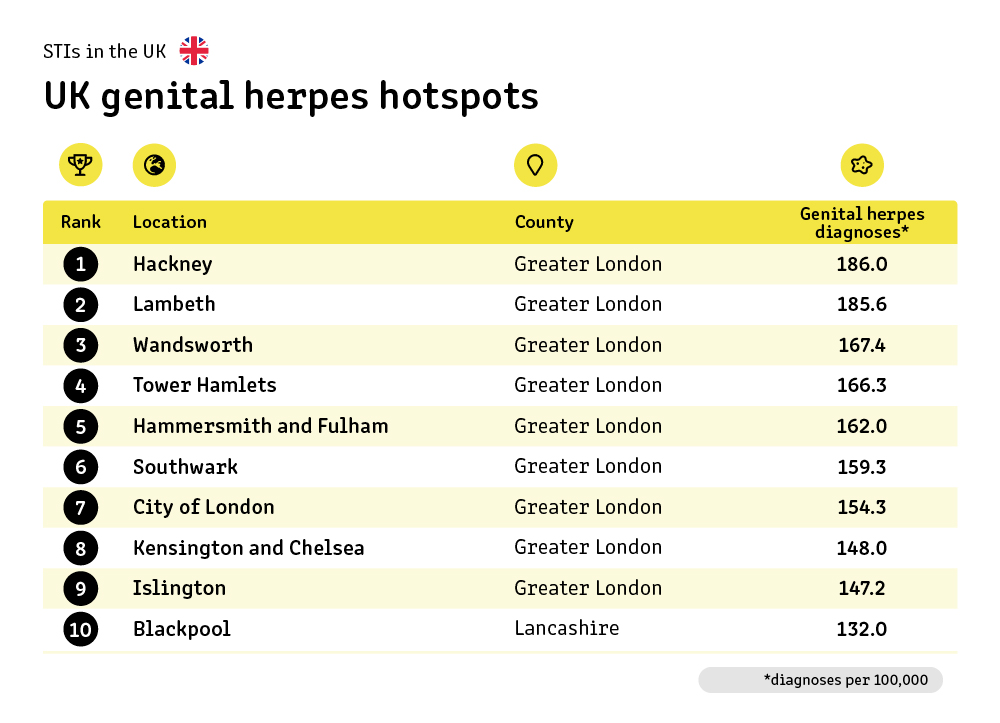 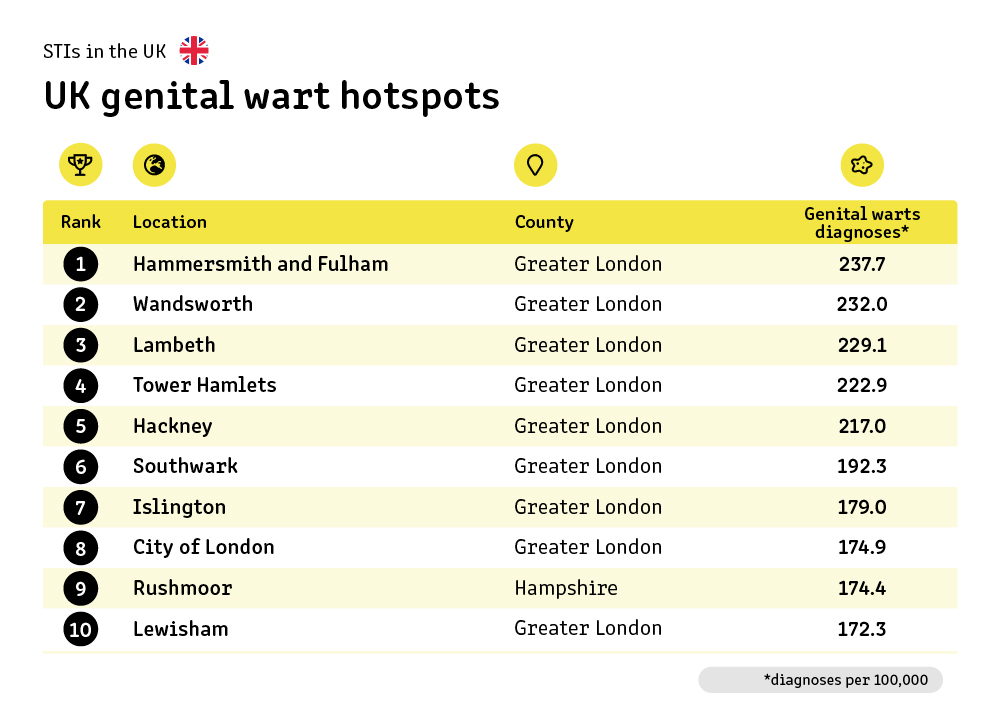 You’re most likely to encounter genital wart in Hammersmith and Fulham, as there were 237.7 cases per 100,000 people in the area. Wandsworth and Lambeth are both back for repeat appearances recording 232 and 229.1 cases per 100,000 respectively. 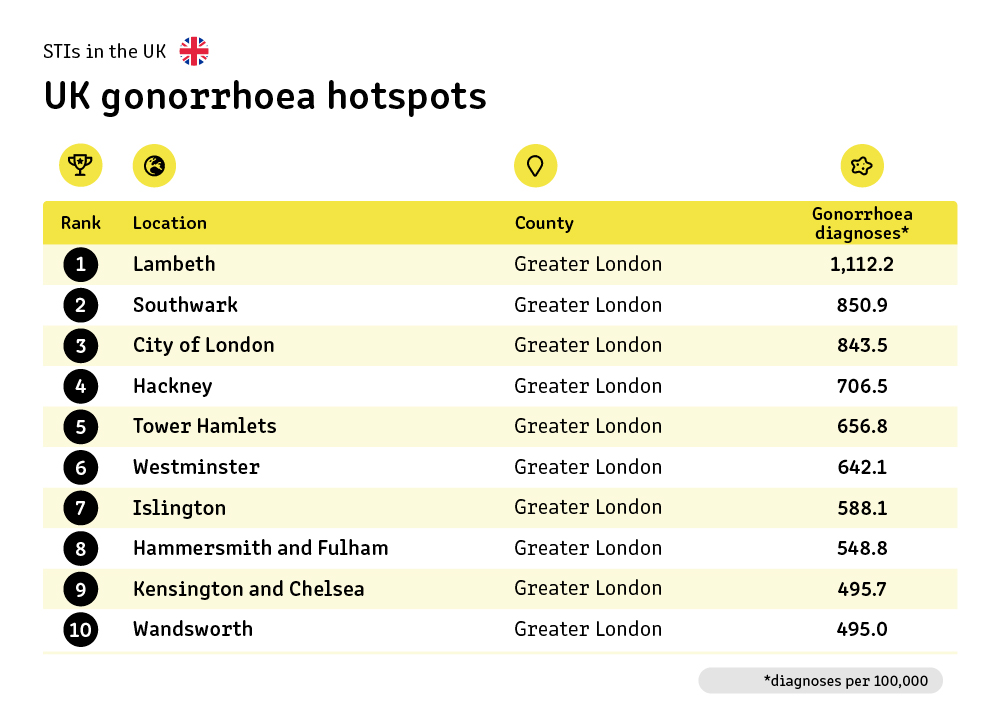 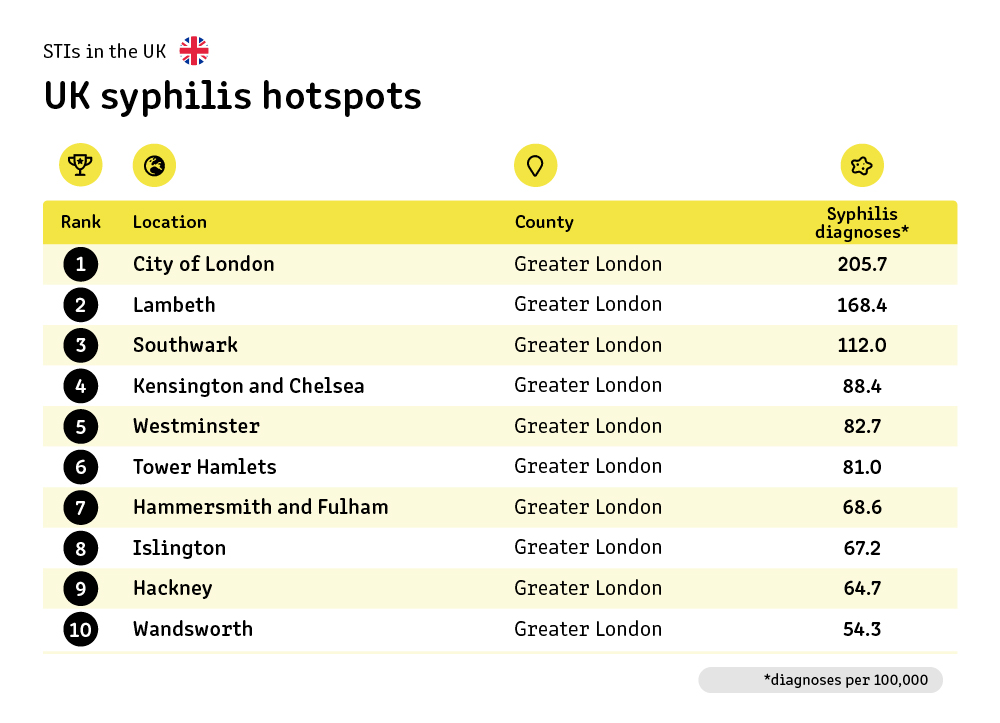 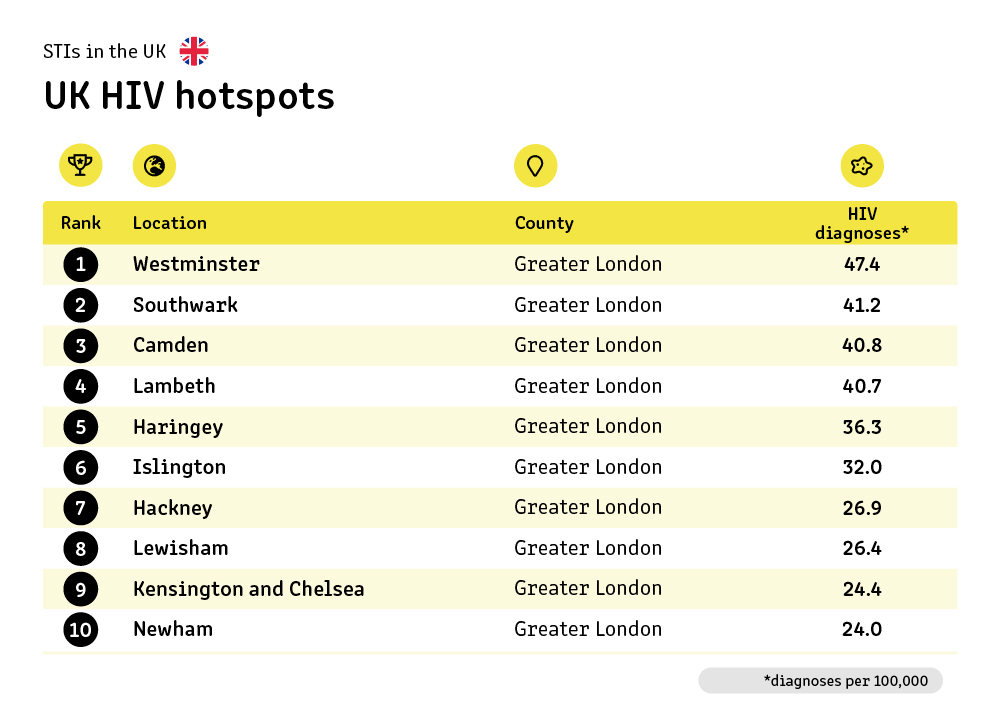 STIs across the regions

As almost all of our top ten locations for each STI were in London, we looked at regional differences in order to gain a better perspective of the STI landscape. 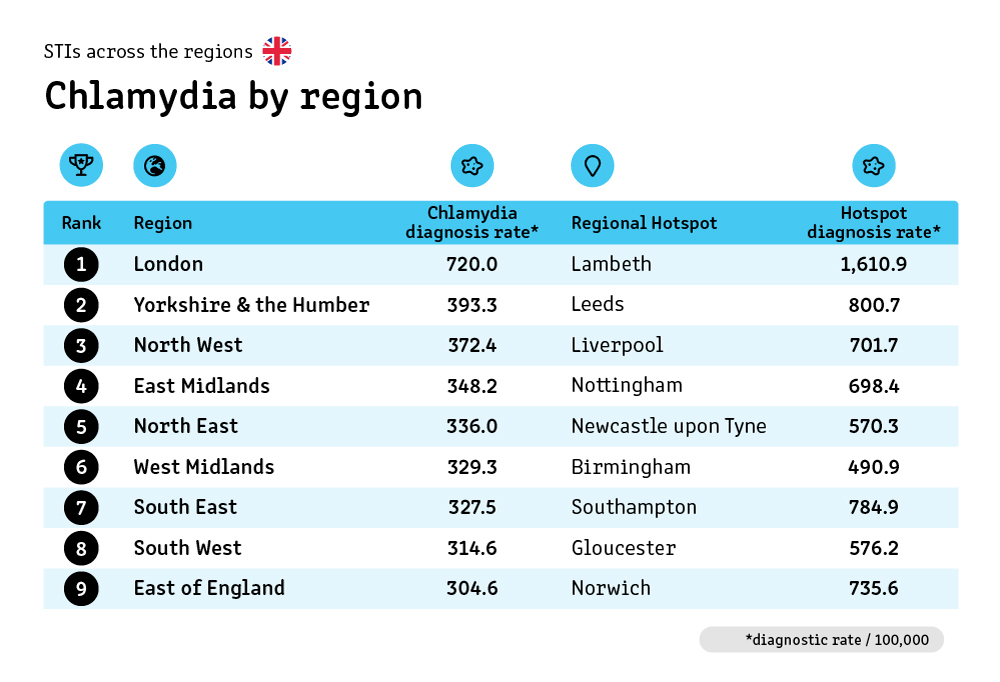 Yorkshire and the Humber is the region outside of London with the most cases of chlamydia with a rate of 393.3 per 100,000, while its hotspot Leeds has a rate almost double that at 800.7.

The East of England is again the area with the lowest rate of infection at only 304.6 per 100,000. However, Norwich, the location with the highest rate in the area, recorded a strangely high number of cases with 735.6 per 100,000. 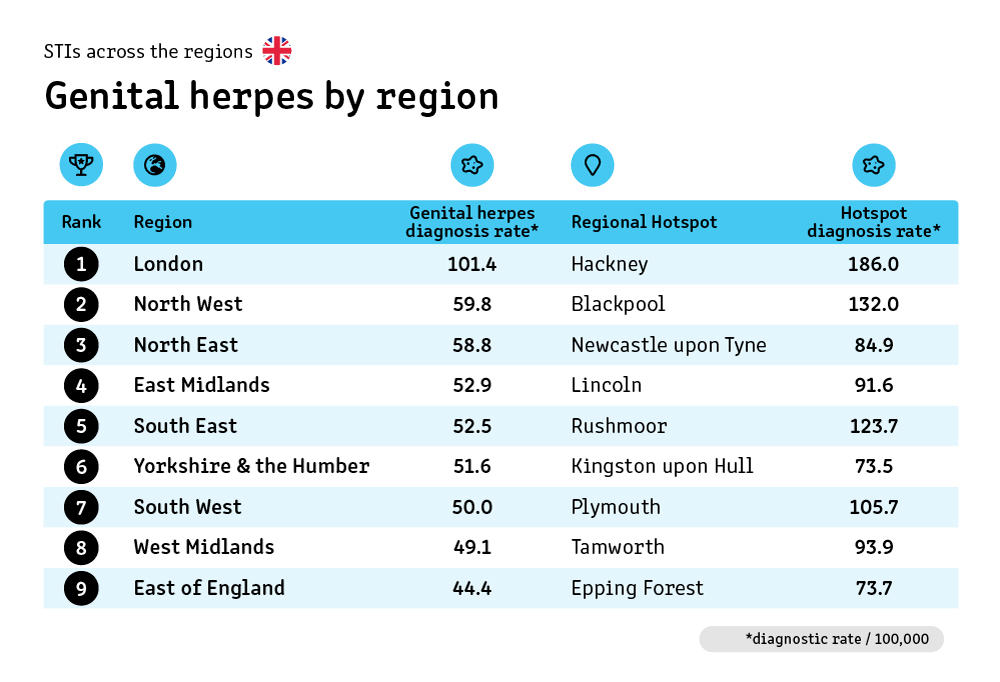 The North West has the highest rate of genital herpes outside of London, with 59.8 cases per 100,000. The hotspot in the region is Blackpool, which has a rate of 132.

The East of England continues its run at the bottom of the table, having recorded a rate of only 44.4 diagnoses per 100,000. Regional hotspot Epping Forest has the most cases with a rate of 73.7. 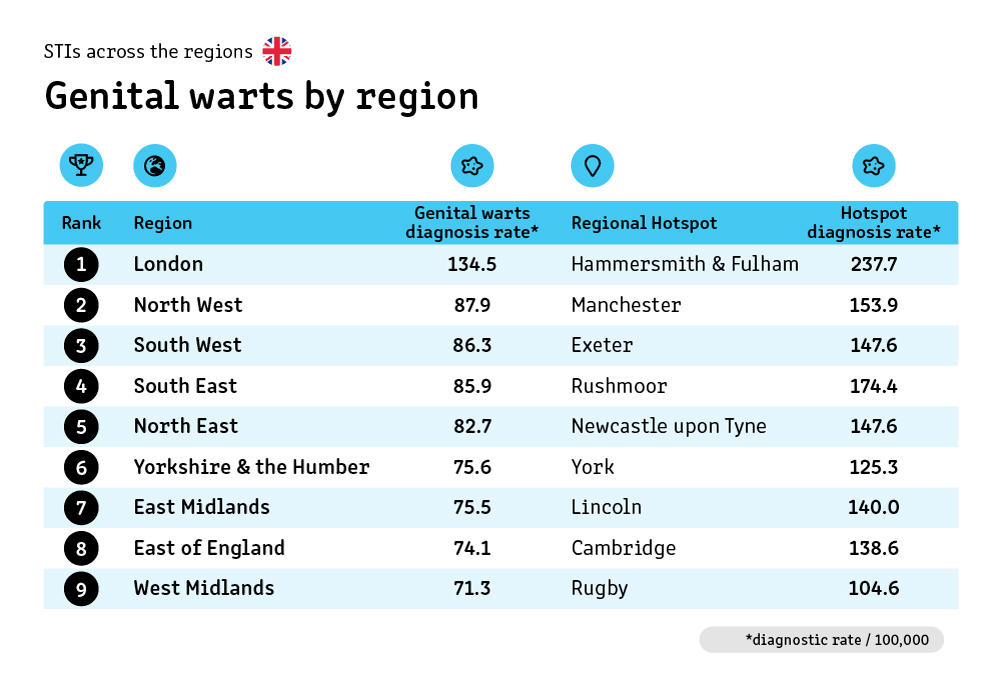 The North West is once again the region with the highest rate of infection outside of London, with 87.9 cases per 100,000. Manchester has the highest concentration of these cases with a rate of 153.9 per 100,000.

The West Midlands is the region with the lowest rate of infection, with only 71.3 diagnoses per 100,000, while the regional hotspot, Rugby, has a rate of 104.6. 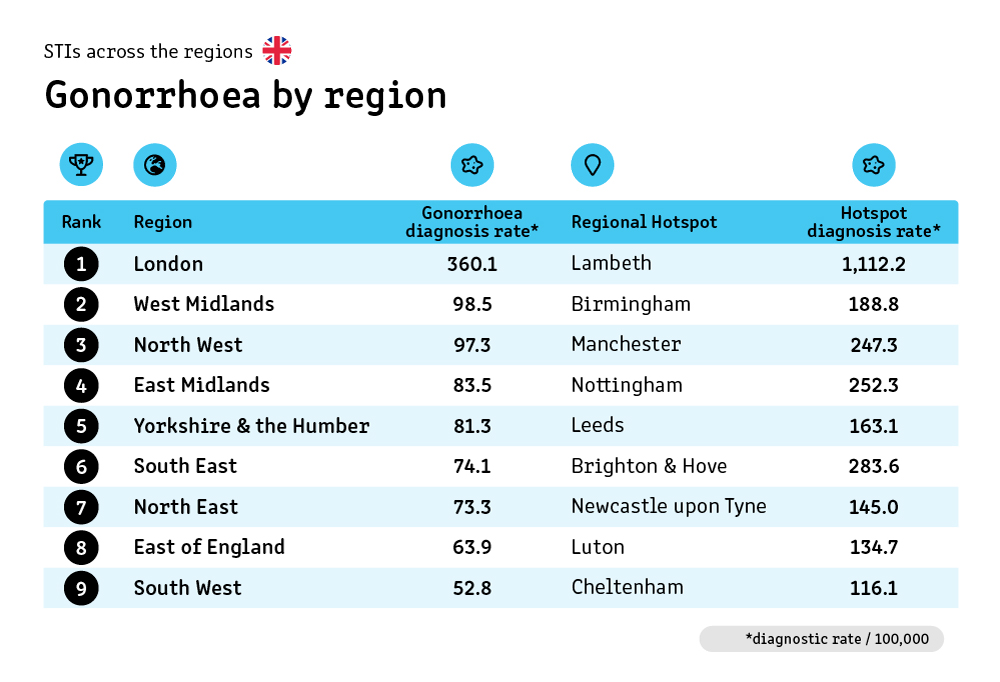 The South West has the lowest rate of gonorrhoea infections, with a rate of just 52.8, although the regional hotspot, Cheltenham, has a much higher rate of 116.1. 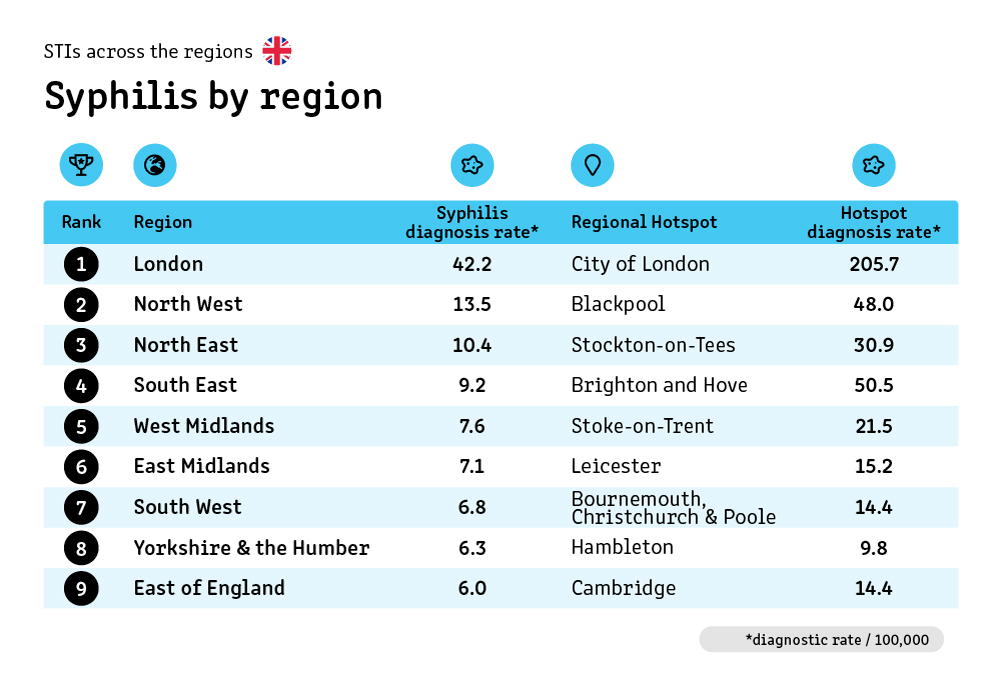 The region with the highest rate of syphilis infections outside of London is the North West, where there are 13.5 cases per 100,000 people. Blackpool is the regional hotspot with a rate of 48 per 100,000.

The East of England is the area with the fewest cases and a diagnostic rate of 6. Cambridge is the most syphilitic place in the area with 14.4 cases per 100,000. 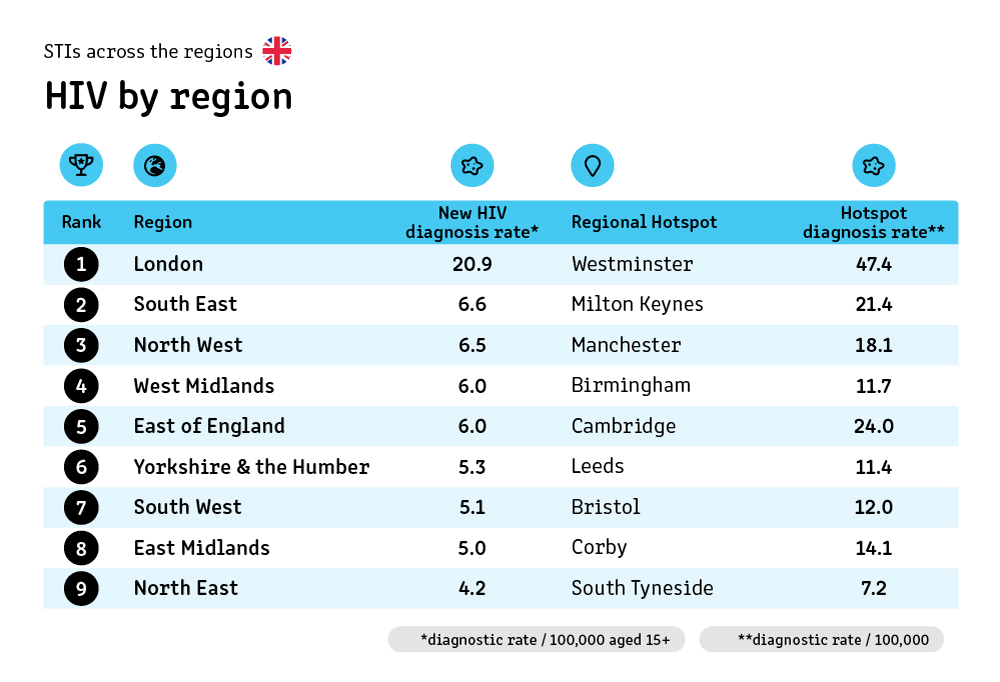 Outside of London, the region with the highest rate of HIV infection is the South East, with 6.6 diagnoses per 100,000. The regional hotspot is Milton Keynes, where the rate is as high as 21.4.

The region with the lowest proportion of HIV diagnoses is the North East, where the rate is only 4.2 per 100,000. Even the region’s supposed hotspot, South Tyneside, only has a rate of 7.2.

Before looking into the prevalence of STIs within different parts of the UK, we wanted to find out how we compare against other countries. In this section, we will compare countrywide data with other European nations to find out which have the most cases of various STIs. 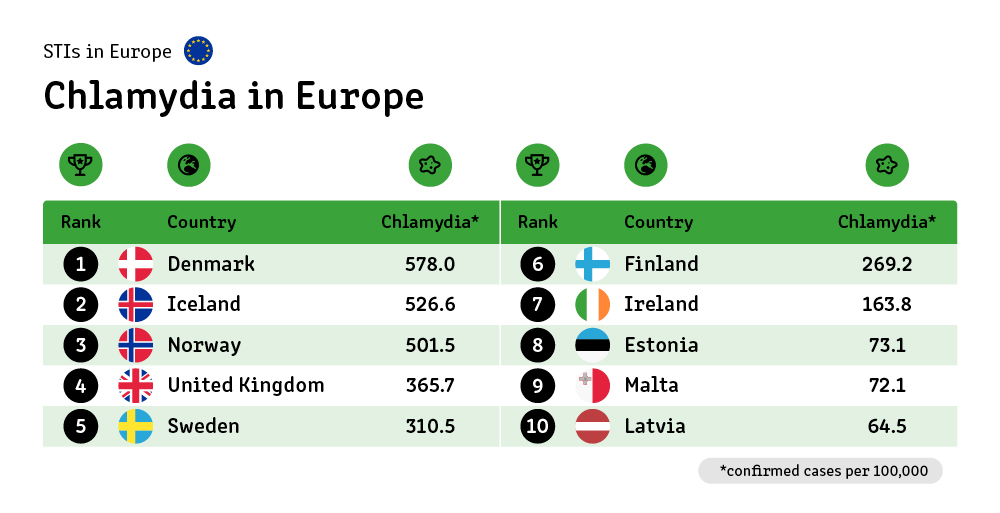 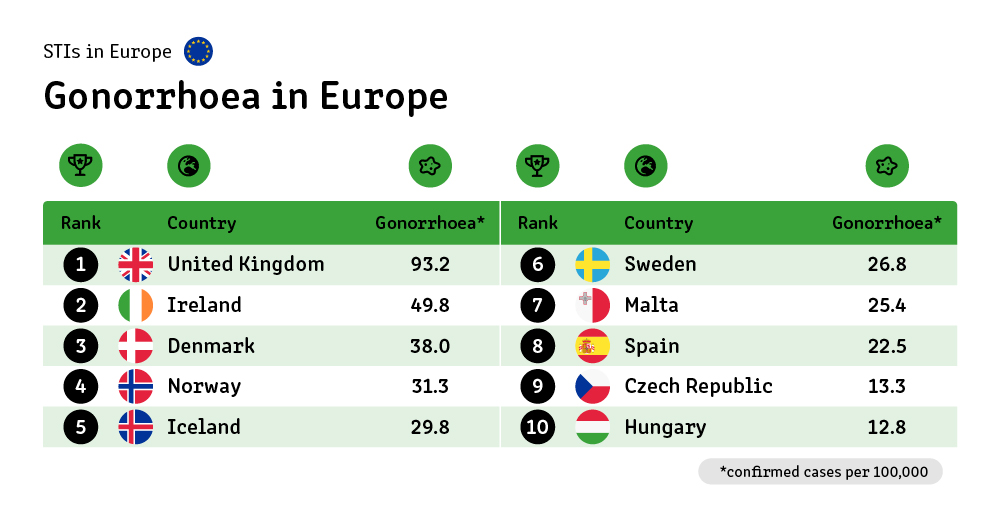 Again, we see that most countries with high case rates are in Northern Europe, with the top six being countries in Scandinavia and the British Isles. Malta also makes a repeat appearance in seventh place with a rate of 25.4 per 100,000. 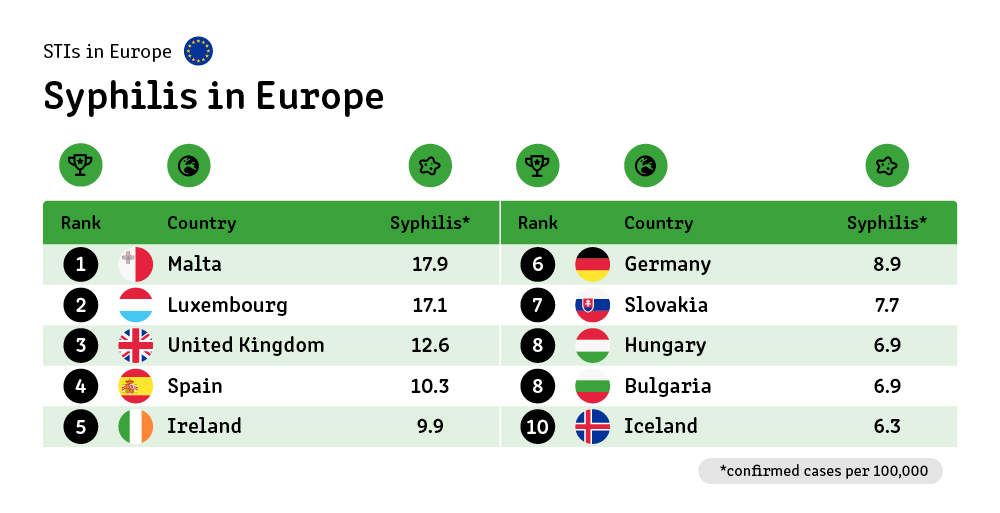 Malta is the syphilis capital of Europe with a rate of 17.9 confirmed cases per 100,000. Although, with a population of fewer than 500,000 people, there should be fewer than ninety cases on this syphilitic isle.

Malta is closely followed by another tiny European nation, Luxembourg, which has a case rate of 17.1 per 100,000, while the UK takes third place with a rate of 12.6. 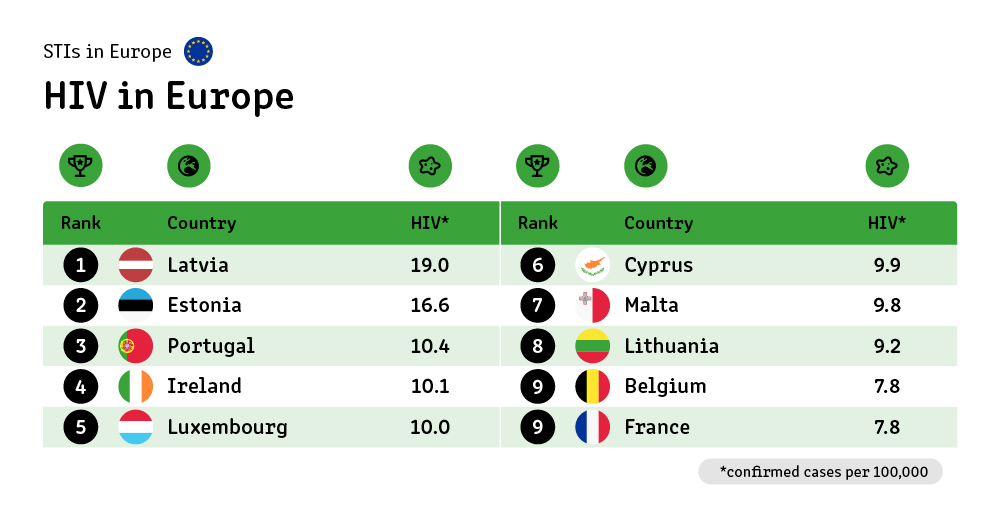 Latvia is the country with the highest rate of HIV cases in Europe, with 19 confirmed cases for every 100,000 people. Neighbouring Estonia comes second with 16.6 cases per 100,000, while Portugal takes third place with a rate of 10.4. 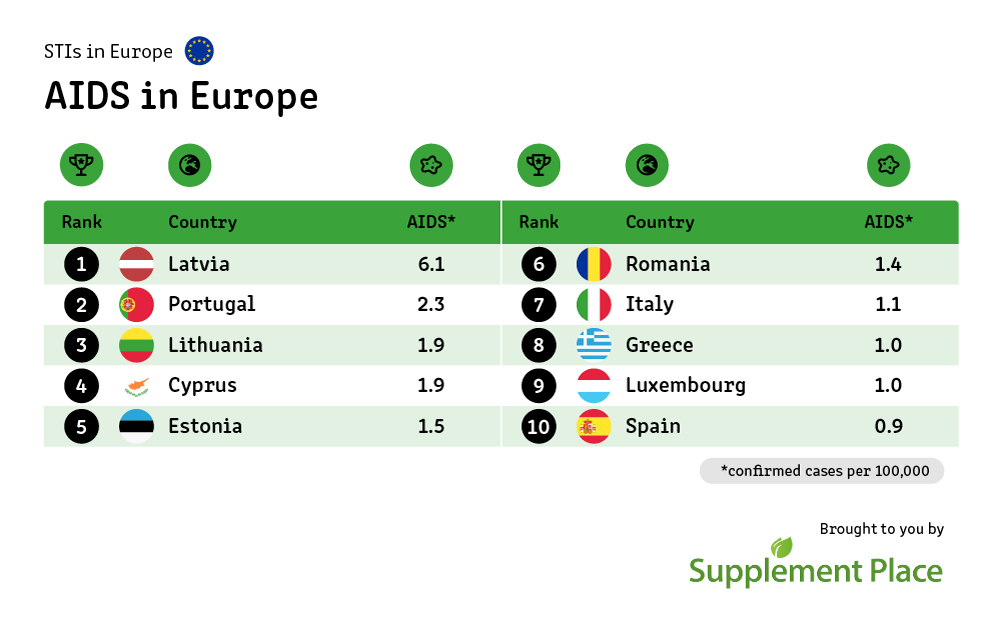 The UK again performed relatively well, coming nineteenth with a rate of just 0.4 cases per 100,000. Cases for AIDS are much lower than for HIV due to widely available treatments which have proven successful in preventing HIV from developing into AIDS.

We wanted to find out which parts of the UK and Europe had the highest levels of various STIs. For the UK, we used Government data from Public Health England. Unfortunately, we could not find comparable data for the devolved UK nations, so were only able to present rates for English locations.

This data allowed us to view rates of several STIs in over 300 locations within England alone. We were then able to rank the locations by the rate of new diagnoses of each STI, giving us a top ten for each. The data was then also sorted by region to give a view of the levels of each STI across the country.

For Europe, we used data from the European Centre for Disease Prevention and Control (ECDC). This data gave us an overview of the levels of confirmed cases of each STI across the majority of European nations, allowing us to directly compare levels in the UK with other countries. These countries were then ranked by their rate of confirmed cases in order to produce a top ten list for each STI.